The Rebirth of the Apennines 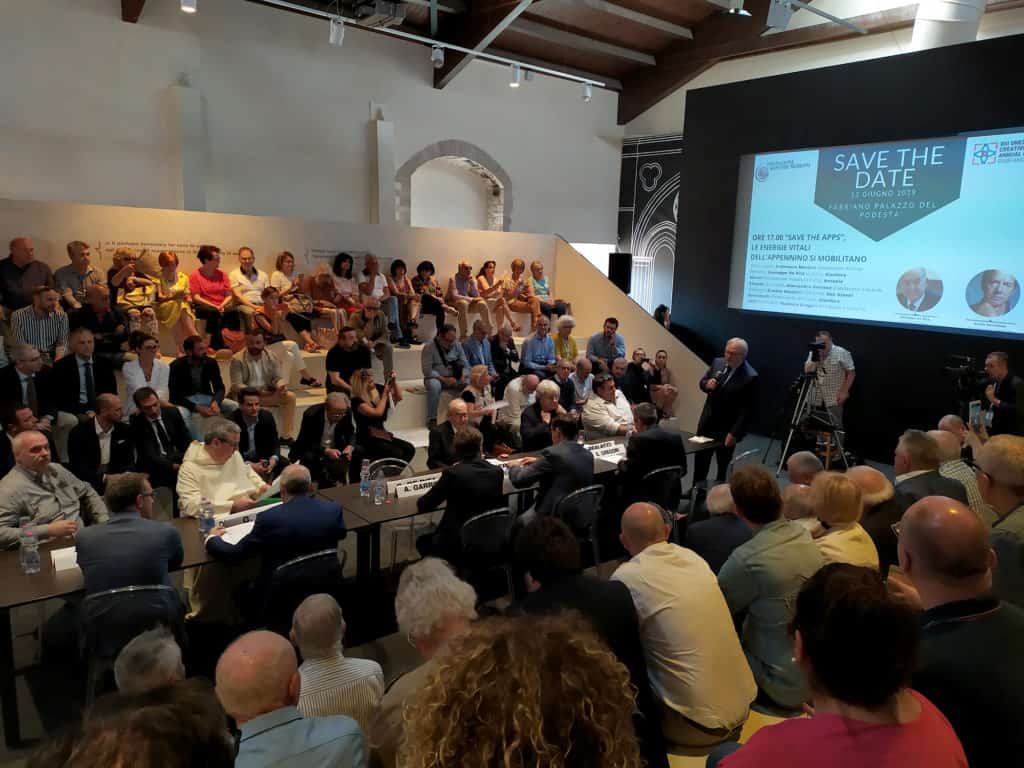 President engineer Francesco Merloni  I thank you on behalf of the congregation of Camaldolese monks for the invitation to be here today to testify to a hope based on history .
Dear Ladies and Gentlemen .
I — “You will be a Cedar for the nobility of your sincerity and your dignity . Hawthorn for the incentive to correction and conversion . Myrtle for discrete sobriety and temperance , Olive for the fecundity in joyful peaceful and merciful works, Spruce pine for elevated meditation and wisdom .The elm tree for support and patience. Box tree because informed with humility and perseverance”.
Thus the hermitage community born in the heart of the  Apennine Forest of Casentino  laid the foundation, with their first written rules , for their own lives in relationship to the environment that surrounded the community and them. So it was said ” We take care of the forest that cares for us”.Care means to know, to appreciate, promote, protect. It is a reciprocal creation of dynamic ethics that on a social ,anthropological and economic level arises and develops in the experienced environment. For more than eight centuries the  hermits of Camaldoli have given life to such ethics , of which vital traces are still visible fruit of an inheritance at times implicit, needing to be rediscovered.
About the same time in Fonte Avellana on Mount Catria in the Marche region of the 1200s  , observing the social and political situation of the time and considering the condition of the serfs, subjected to various fiefdoms. Thanks to Prior saint Albertino from Montone ( + 1294), the monks created a system that rejected that submission declaring that servants don’t exist but men do , “Non servuli , sed homines” Giving these people their dignity the monks let them share in the profits of their work and even in the planning of the work itself. Documentation of this attention to the territory is still present in the actual agricultural associations and universities of native men that , like tesserae , makes up the mosaic of the Apennines , and identifies local communities that,  in a responsible way and with a strong social bonding or link to human solidarity, as in the old ways , manage the heritage of pastoral fields and woods of the Apennines that belong to them .
The project of UNESCO is all about the Camaldolese forest codex and the roots of sustainable  development  of the mountain environment . This is the aim of the project , promoted by the Collegium “Scriptorium  Fontis Avellanae” and by the Congregation of the Camaldolese monks , in agreement with INEA the   The National Institute of Rural economy, and financed by the Ministry of Food  and Agricultural policy, Forests and Tourism.    Its objective is to rediscover the relationship between
Benedictine ,Camaldolese Monasticism and the forest , with all its implications (Spiritual, Ethical,Technical, Economic and Social): we are dealing with a unique experience, historical paradigm of a balanced relationship between man and the mountain environment ,that can be worked out in today’s reality as the basis of a possible development in the Apennine range.
II — In fact the Apennine mountains , the backbone of Italy, are aware of their strengths and weaknesses, prospects of development and in themselves are aware of their identity and sense of significance. The vital energy is mobalised.
If we talk about vital energies mobalized  , that means , this land despite the fact they say it is dead it carries a dynamism made possible by the awareness of being still very much alive ,and even that is the fruit of a history. The Apennine mountains are a  ” Factory that you cant outsource”. (Dom Salvatore Frigerio ) that can become a stimulus for rebirth again .
This rebirth founded on the vital energies of a territory also depends on a wise management, a long sighted respect for the environment and the woodland heritage . It depends on a comprehensive vision able to connect the roots of the past to the future. With this hope the Camaldolese community, has promoted a project of management named “La Fabbrica Appennino” (“The Apennine Factory”).
Which  presumes three integrated areas :
1.  Scientific and Cultural (climatic impact and forest experimentation.)
2.  Economic – Business enterprise (Development of the forest chain shared with local communities)
3.  Logiistic , constuction  (Restoration of the ancient village of Sorchio in the district of Frontone already the property of the monastery of Santa Croce of Fonte Avellana ).
The ” Fabbrica Appennino” is a proposal for the integrated management of the territory and for the economic development of the internal areas. It includes the implementation of activities in the scientific /Environmental, Social, Cultural and Business Fields. It actually represents a case study of experimentation of a wise management model of the territory , which can be started thanks to the scientific competence of the Universities , first of all that of Urbino , thanks to the Foundation Medit Silva ,of the local communities of the Apennines ,and thanks to the intervention of public institutions and enterprises .
Taken all together the predicted  measures in the mentioned fields can become an exportable model to other similar realities , typically characterised by the same impoverishment in the economy and population, but rich in woodland heritage and history.The project begins certainly from the idea of the roots of a sustainable development given in the   Camaldolese Codex . In a perspective of responsible development and social economic vitality, in the awareness that in a near future , the climatic conditions will not  be the same as today.

III —   In fact it is by now clear to all the people who feel the need for even the smallest amount of information, that inside the scientific community there is an increasing anxiety about  changes in the climatic equilibrium on our planet ,  and the impact this process will have on the physical and biological systems.
This global phenomenon will have an obvious effect at the local level and our territory , as suggested by all simulation models of future trends. Climate change is not only a question that concerns science . certainly science helps comprehend the data, facts, and contextualizes them in a logical framework, eventually making predictions. However if scientific awareness can help us maintain an objectivity ,   it is not enough to direct us to a virtuous  behaviour  that essentially depends on the assumption of moral and ethical responsibility of human kind  towards the environment.
A determining responsibility for the rebirth which cannot but found itself on the roots of our past. Such development and vital energies , the roots of a new rebirth , depend a wise practical management, in a far-sighted respect for the territory . That can only be reborn if the natural climatic conditions will allow it. A careless management has produced a climatic emergency which might jeopardise  any new project. Ladies and Gentlemen.
The Camaldolese  Forest Codex is a heritage of experience and  hope. Today we are starting a procedure followed by the chair of UNESCO of Genoa to declare it an “Intangible Universal Heritage of humanity “.
An acknowledgement which can reconsider man and the environment where he lives ,the center of our conception  of development and sustainability. We don’t want to become slaves of a presumed superior necessities, but protagonists of a land that revives.
“Not servants but human beings “
Thanks 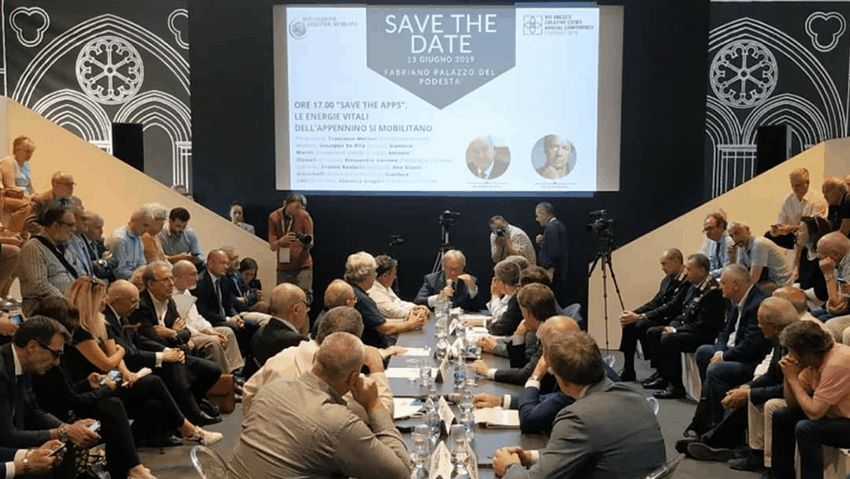 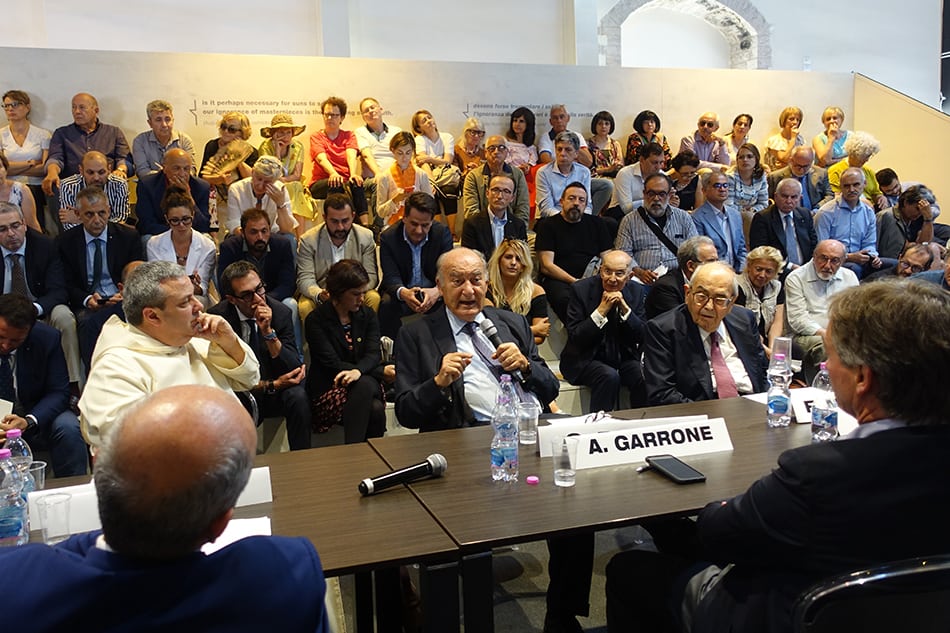 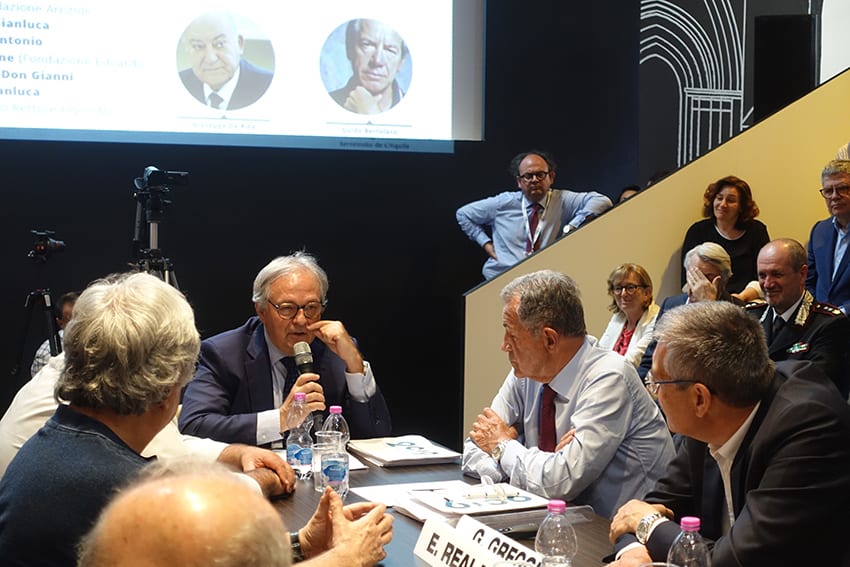